After the welcome ceremony, Díaz-Canel and Higgins held official talks behind closed doors, regarding which no details have been published so far. 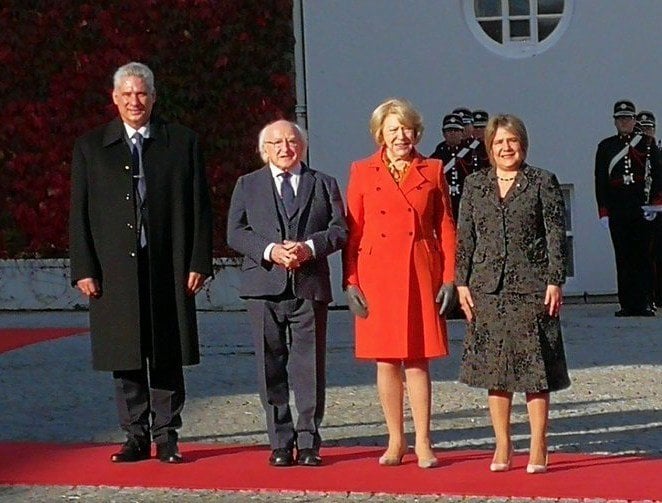 The presidents of Cuba, Miguel Díaz-Canel (l), and of Ireland, Michael Higgins, along with their wives, during the official reception of the Cuban president in the Irish presidential palace, in Dublin, on October 21, 2019. Photo: @PresidenciaCuba / Twitter.

The presidents of Cuba, Miguel Díaz-Canel, and of Ireland, Michael Higgins, met this Monday in Dublin, during the Cuban president’s second day of his visit.

Higgins received Díaz-Canel at the Áras an Uachtaráin presidential house, a palace located north of the country’s capital. Both presidents were accompanied by their wives and their respective delegations.

After the welcome ceremony, which included a review of the troops formed in honor of the visitor, and the greetings by a group of children from a local primary school waving Cuban and Irish flags, Díaz-Canel and Higgins held official talks behind closed door, according to Prensa Latina (PL) news agency.

So far details of the talks have not been published.

After the meeting, Díaz-Canel, the first Cuban president to make an official visit to Ireland, planted an oak tree in the palace gardens, which he described as the “perfect symbol of friendship” between the two countries.

After a toast proposed by the Irish president, Díaz-Canel thanked his hosts for “warm welcome” and “attention given” to them, and recalled the historical ties of both countries since the 19th century.

Díaz-Canel’s agenda this Monday in Ireland also included a courtesy visit to Irish Prime Minister Leo Varadkar, meetings with Cubans residing in Ireland and Irish solidarity groups with the Caribbean island, and other tours of historic sites in the capital, PL said.

Díaz-Canel’s visit to Ireland is taking place in the context of the 20th anniversary of the establishment of diplomatic relations between Havana and Dublin. Higgins had previously visited Cuba in February 2017.

Díaz-Canel, who in addition to his wife Lis Cuesta is accompanied by Foreign Minister Bruno Rodríguez and Foreign Trade Minister Rodrigo Malmierca, will leave for Belarus this Tuesday, as part of a tour that also includes visits to Russia and Azerbaijan, where he will participate in the 18th Summit of the Non-Aligned Movement.

A little less than a year ago, in November 2018, Díaz-Canel made another extensive international tour with visits to Russia, North Korea, China, Vietnam and Laos. In addition, he made stopovers in France and the United Kingdom, where he participated in work meetings with businesspeople and government authorities.