The Ministry of Public Health reported this Sunday 20 new cases of coronavirus, bringing the total number of infected to 2,045. The authorities confirmed 14 discharges and no deceased.

by OnCuba Staff
in Health in Cuba
0 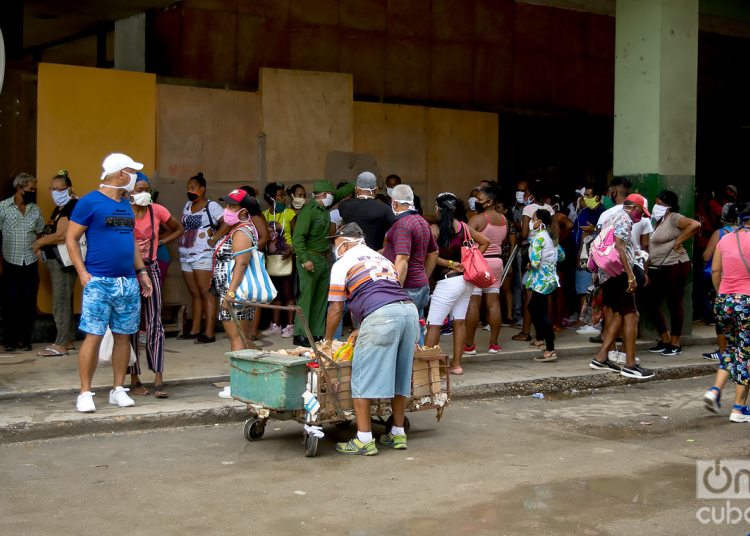 Havana reported all of the coronavirus cases in Cuba for the second consecutive day, mostly associated with transmission events in three work centers in the city. Photo: Otmaro Rodríguez

The Cuban Ministry of Public Health (MINSAP) reported this Sunday 20 new coronavirus infections, so the number of confirmed cases on the island is 2,045, while 14 medical discharges were reported and none died at the close of Saturday, May 30.

Dr. Francisco Durán, director of epidemiology of the MINSAP, specified in a press conference that there are four people in serious condition, all from the Cuban capital. The remaining 147 active cases show a stable clinical evolution.

The information from the MINSAP specifies that a total of 1,809 people have already been discharged, while a total of 414 patients are hospitalized and there are 262 suspects. On the other hand, another 1,748 people are under primary healthcare surveillance in their homes.

Of the new 20 positive cases, 15 are contacts of already confirmed patients, the source of infection of four is being investigated and one has a source of infection abroad. Meanwhile, 18 of the cases on Saturday were asymptomatic and according to the MINSAP daily reports, they have identified 1,054 patients without symptoms as positive, which represents 51.5% of all those infected.

Among the newly confirmed cases, two children stand out, one of them four years old. So far, 227 minors have been reported with the disease, of whom 209 have been discharged.

For the second consecutive day, Havana reported all the cases in the country. Of the 20 confirmed cases during the day, 12 are associated with a transmission event at AICA Laboratories, west of the capital, according to Dr. Durán.

This has a lot to do with the La Época store focus, located in the city center, which led to other transmission events at the AICA Laboratories and the Ministry of Domestic Trade’s National Transportation Enterprise.

According to Havana Governor Reinaldo García Zapata, since May 19, when the hospitalization of the first patient associated with the focus at La Epoca was officially reported, the capital has reported 111 positive cases, 62 of them associated with events in the aforementioned centers.

In these entities, more than 1,200 people have been studied and 137 are awaiting to be tested or for results.

Havana has an enormous responsibility in the behavior of the disease in Cuba, said President Miguel Díaz-Canel this Saturday, who specified that the capital is being left behind and is the epicenter of the virus in the country.

“To the same extent that we have been progressing in the decrease in cases, people have been gaining in confidence and are altering the concepts of social isolation that we have raised,” said the head of government.

In recent days, the trend of decreasing cases has been reversed with respect to previous weeks. For example, from May 18 to 24, a total of 66 confirmed cases were reported on the island, while from May 25 to 30―one day less―they already make up 98.

According to the data of Cuban scientist Amílcar Pérez Riverol, one of those who has contributed with the most clarity to the analysis of the coronavirus figures, this rise in positive cases has occurred despite the fact that fewer PCR tests have been performed (11,623 the last week and 9,763 during the present one).

The combination of these two factors places us in a scenario of greater positivity (1.00% in the last six days compared to 0.56% in the previous week). The figures have soared mainly in Havana, which has reported more than 85% of those confirmed cases across the country.

The trend of the last days does not lead to optimism, and they are proof that it is necessary to maintain a high risk perception. In this regard, Díaz-Canel specified that although the country is already preparing the entire strategy for the recovery stage, it cannot be applied until there is certainty that there is complete control of the epidemic.

“We are not going to destroy everything that has been functioning successfully these times,” said the president, who stressed that it is necessary to comply with all protocols to “be able to start a phase where we will treat the disease as endemic.”