However, officials acknowledge that it has not been possible to stabilize the offers of certain high-demand products, such as splits and freezers, although “there is already a greater presence of these assortments.” 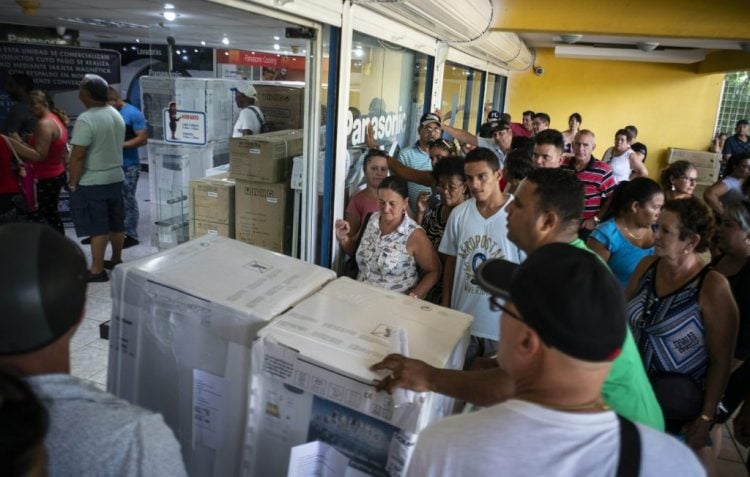 People at the entrance of a store in Havana selling household appliances in freely convertible currency. Photo: AP / File.

The network of stores selling in dollars and other freely convertible currencies (FCC) has continued to grow in Cuba since the opening of the first stores in late October, Cuban media confirmed this Tuesday.

After starting with just a few stores in Havana and Santiago de Cuba, 76 currently operate throughout the island, as well as 10 virtual stores. In addition, the opening of new shopping centers and the incorporation of hardware, computer, high standard furniture and professional gastronomic equipment lines are planned, the official Granma newspaper reported.

However, officials of the state chains that make up the network ―Cimex, Tiendas Caribe and Empresa de Servicios Automotores s.a. (Sasa)― acknowledged that it has not been possible to stabilize the offers of “certain high-demand products,” such as splits, freezers and electric motorcycles; although, they said, “there is already a greater presence of these assortments.”

Rosario Ferrer San Emeterio, commercial vice president of the Cimex Corporation, explained that these “shortfalls in supply” were due to “sales being much higher” than initially planned, despite which, and “in general,” “the planned objectives have been met” and “the collection of income has been satisfactory.”

The official affirmed that “measures have been taken to expand the capacities in the stores, to readjust the conformations of the containers and contracts have increased.”

The new contracts “guarantee the arrival of sufficient merchandise to support the continuity of the commercialization”, said Ferrer San Emeterio, who stated that “the volumes that must arrive in the months of March and April exceed the monthly sales.”

These are, according to the directive, “durable products,” whose demand “should be more moderate.” Still, she explained that new assortments should be incorporated, including hardware, computers ―whose sales should start at the end of March―, power plants, surveillance camera systems, cold rooms, metal carpentry, power tools and others “that respond to customer requests.”

Amilkar Odelín, commercial director of the Tiendas Caribe chain, when speaking about expansion, explained that although they initially worked with nearby suppliers, they have currently hired the services of other manufacturers, which although it makes the process “a little more delayed,” it also makes it possible “to expand the assortment in quantities, well-known brands and models.”

He also referred to the incorporation into these stores of products made in Cuba, including motorcycles and mopeds, while they undertook negotiations to sell sanitary furniture, ceramics, kitchens and the demanded splits.

For its part, the Automotive Services Company s.a. (Sasa) ―which sells auto parts and other automotive assortments and that today has four stores for sale in FCC only in Havana― plans to expand to the entire country and will “immediately” do so in Villa Clara, Camagüey, Holguín and Santiago de Cuba provinces.

Yadira Torres, commercial director of Sasa, also acknowledged having faced “setbacks” with supplies, especially those of high-demand products such as motorcycle units, but said that “in the second half of March the commercialization of this assortment must be restored, for which the required guarantees exist.”

She added that her chain has also “prioritized” the contracting of small-format hand tools and paints, which “should already be available on the web as of April.”

The sale of various items in FCC in these stores ―mainly home appliances and automotive― is done through magnetic cards linked to bank accounts in dollars and other foreign currencies.

It is a Cuban government measure, taken fifteen years after the elimination of dollar circulation on the island ―in order to boost the economy, affected by U.S. sanctions and the crisis in Venezuela―, to alleviate its financing difficulties and avoid the flight of foreign currency.